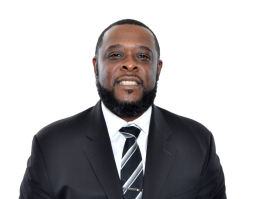 Buford Clayton Moore III was born March 1, 1971 in Huntsville, Alabama and is the only son of the late Buford C. Moore Jr. and Eloise Moore. He has two siblings Felicia and Leandre.

Elder Moore was educated in Huntsville City Schools. He accepted his calling into the ministry on December 19, 2004, beginning under the guidance of Pastor Charlie Humphrey III at Phillips Tabernacle P. B. Church. He was licensed as a Minister of the Gospel on May 31, 2006 by the Mallard Creek Primitive Baptist Association (Huntsville, Alabama). He received a Certificate of Biblical Studies from Huntsville Bible College on April 13, 2010. He was ordained on May 1, 2015 by the Indian Creek Primitive Baptist Association (Huntsville, Alabama). He is employed by Aerie Aerospace Engineering at Marshall Space Flight Center as an engineering technician.

Along with preaching, he also enjoy teaching bible study each Wednesday. He has taught the New Members Class, the Teen Wednesday bible class, and the Men’s Sunday school class.

In December 2005 Elder Moore married, Delicia Smith Moore, who is a graduate of Alabama A&M University with a Masters in Elementary Education. She is currently a teacher in the Huntsville City School System. To this union the Lord blessed them with two beautiful children, Tyree and Nia. They currently reside in Harvest, Alabama.

Elder Moore was elected Pastor of St. Andrew P.B. Church on Tuesday, September 24, 2019. He is humbled and thrilled to follow God’s call.

Promote Your Page Too